In some cases, it can be helpful to do file I/O asynchronously. Writing to a file asynchronously allows your application to continue executing other tasks while the file is being written. This is helpful when writing large amounts of data or when you will not need to read content from the file immediately. Performing read/write operations asynchronously is especially useful with GUI applications, because the program's user-interface can still be redrawn (if window is resized, for example), while the file I/O operation is being completed.

To get started, create an async method called WriteFileAsync(). This method will take arguments for the directory path, file name, and the content to write to the file.

It is good practice for async methods to return a Task, as demonstrated on Line 25. This enables you to ensure that the task is completed, using asyncTask.Wait() or asyncTask.IsCompleted() before trying to do something with the results of the asynchronously executed code block.

Also on Line 25, take note of the method name WriteFileAsync(). It is a widely-accepted naming convention to append "Async" to the name of all asynchronous methods.

The using keyword on Line 28 is different from the using directives we usually include at the beginning of our project files. Used as a statement, the using keyword helps ensure that the Dispose() method of the referenced object is called correctly, even if an exception occurs. In this case, it helps ensure the StreamWriter object is properly disposed of so the file being written is never locked in a read-only state.

Note, when creating a new StreamWriter instance (line 28), you can omit the directory path altogether to place the file in your project directory.

The await keyword on Line 30 is the code we are actually asynchronously awaiting to complete. It is this code that writes the content to the file, so it is this file i/o operation that we want to run in the background while our program performs other tasks.

Next, begin constructing the Main() method. You will need to set the directory path, filename, and content to pass to the method you created above. The directory could be hard coded (e.g. C:\Users\wellsb\Desktop\) or you may use the system's environment variables to define the path to a known folder, such as your Desktop. Consider the example below.

For the purpose of demonstrating the asynchronous feature, I needed a sufficiently long string to write to the disk. I created a method (called on Line 15) that uses a StringBuilder (using System.Text;) to create a long string. See the complete example at the bottom of the tutorial for all the details.

The method called on Line 20 will run even before the asynchronous file write operation (from Line 17) is completed. To demonstrate this, consider the following example.

If file write operation is done asynchronously, however, the method would be triggered before the async task completes. If this is the case, the would expect this line to be printed after the async task starts, but before it completes, as shown below. You can also verify this using the Visual Studio debugger. 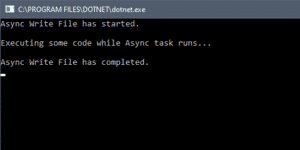